The Road To Masters Nationals 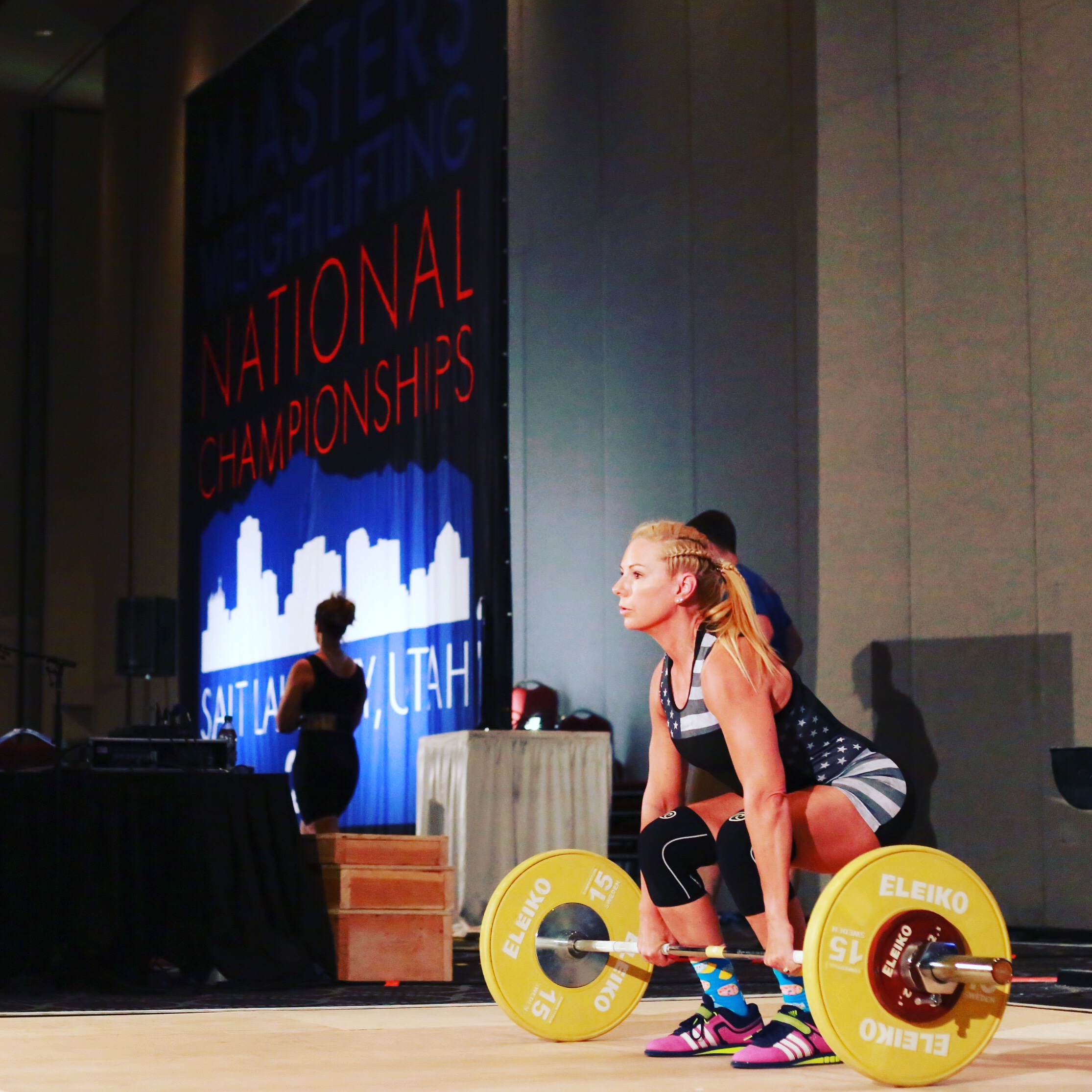 Have you ever done something knowing it was entirely about the experience and doing your personal best, knowing full well that you had pretty much zero chance of winning, but you did it anyway? For me this was Masters Nationals for Olympic Weightlifting. Never in a million years did I expect the words “I’m an Olympic Weightlifter” to come out of my mouth. Hence the phrase, never say never.

After a little over a month of exclusively weightlifting there was a local meet at my gym, CrossFit Blaze. The olympic lifts were always my nemesis and I tried to avoid them as much as possible in all the years I had been CrossFitting. The last thing I wanted to do was stand on a platform in front of dozens of people and attempt to snatch and clean & jerk. I honestly cannot imagine what could be scarier, wait, I can. Having to wear a singlet while lifting at the meet takes it to the next level! Lol! I had to though. We took all the necessary steps in case I did qualify for Masters Nationals. I registered as an athlete with USAW, wore the dreaded singlet, declared a weight class and competed at a USAW sanctioned meet.

The day had arrived. It was incredible to me how I was able to block everything else out and focus solely on lifting. The weights even felt easy that day. As nervous as I was before the meet, I was surprisingly calm and composed on the platform. I made 6 out of my 6 lifts and qualified for the big event! Okay, that’s great, but I wouldn’t actually go right? Why would I?

To say I was feeling pretty good about myself for setting my goals, working hard to achieve them and qualifying, is an understatement. It was an INCREDIBLE feeling, however in my mind I was done with Oly (Olympic) lifting. I did it for a month, wrote my blog and competed in the meet, end of story. How could I possibly go to Nationals? I don’t belong there. Those are experienced lifters. The women in my age group and weight division would be lifting so much more than I ever could. There would be no point in competing. While those were all my thoughts at the time, all of my friends felt differently. Do I need new friends or do they have a point I wondered?! Lol. I had one friend say if you had an opportunity to go to the Olympics, would you pass because you knew you couldn’t win?! Umm, of course not. I had someone else say that qualifying is an honor and simply going and doing my best would be an incredible experience. Also very true. The one that really got me though was the idea that it may send the wrong message to my children by not going. Ouch!

So let’s look at that. We are told from an early age that we should try our best, give 100%, never quit, challenge ourselves, that it’s NOT ALWAYS ABOUT WINNING! That being said how could I not go and give it my best?! So I did just that. I trained for almost 8 weeks under the watchful eye of Coach Jason Anderson at CrossFit Blaze. Coach Melvin Jensen did my programming for me. I lifted 4 days per week and had 3 rest days. I quickly learned that a rest day didn’t mean, let’s take a pilates class. It meant REST. Recovery, sleep and nutrition all played huge roles in surviving this kind of training. (something so different than anything I had ever done)

Before I knew it I was in Utah. It was only going to be my second lifting meet and it was Masters Nationals! Coach Jason and I decided, since it was all so scary and new to me, that I would go in conservative with my starting weights so I could enjoy the experience and actually make some lifts on the big platform. Was I nervous?! Not at all. (so lying) The meet was held in the Salt Lake City Convention Center. There were three huge platforms, bright lights, judges in suits and ties. Why would I be nervous?!  I kept telling myself not to touch the barbell with my foot, a habit I got into in training, where if it happens on a competition platform, the attempt is automatically red-lighted. Then I was hearing these clicking noises when I first walked out onto the platform. It felt like there was a cameraman right next to me shooting incessantly, not nerve wracking at all! I later learned it was a motion sensor camera, capturing each movement I made on the platform! Lol! I made 4 of my 6 lifts that night! That felt like a success! To this day I don’t know where I placed and I don’t care. It was definitely not about that.

How many times have you thought about doing something, but didn’t because you were scared. You worried you wouldn’t be good enough, you wouldn’t succeed, wouldn’t be the winner. Who the hell cares?!! Everyone can win. Everyone can also lose. It’s through our experiences that we grow and experience success, which only we can truly define for ourselves. If you don’t put yourself out there, you’ll never know what you’re capable of, what excites you, what brings you joy. I am beyond thrilled that I lifted at Masters Nationals. I feel blessed not only that I qualified and was given the opportunity to compete with so many amazing Oly lifters, but also that I once again stepped out of my comfort zone. So are you winning? I think you are if you’re growing, if you’re learning. Are you…? With this comes success.  #doitfortheexperience