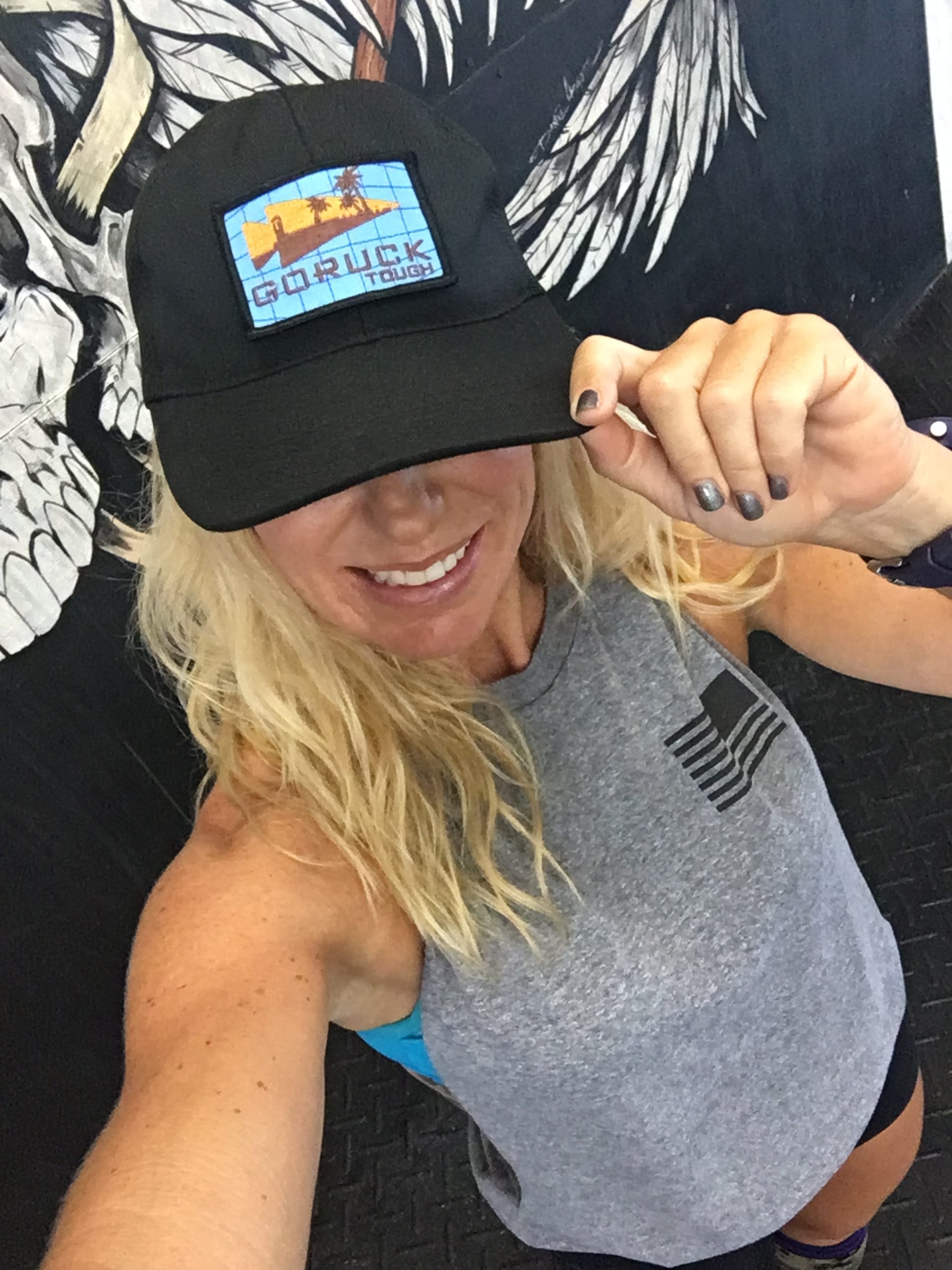 When I tell people that I’m going to do a GORUCK Tough event, that I’ll be up all night with a group of mostly strangers, carrying a ruck pack with a 20# metal plate inside (the minimum I’ll carry for most of the 12-15 hours), that I won’t sleep or barely have any breaks, that I’ll be led by a Special Forces Cadre and be at his mercy for whatever he decides to throw my way, the general response is, “You’re crazy! Why would you ever want to do that?!?” So here it is! The following are my reasons why I put myself through this “torture”.

Of course this has to be my first reason! Whether it’s GORUCK training or an actual event you know I’m wearing my Lola Gams knee socks! Their ingenious fabric blend with corespun CoolMax makes them the perfect socks for this! You are pretty much on your feet for these 12-15 hours, hiking, running, climbing, squatting, lunging, and on different types of terrain from beaches, to gravel parking lots, to city streets. The arch support in Lola Gams reduces fatigue and holds the sock in place eliminating slippage-induced blisters. The mesh panels in the socks reduce bulk and ventilate high movement areas of the foot as well. Because you’re feet are in and out of lakes, ponds, and oceans the moisture wicking, quick drying feature is also a huge plus! I have yet to have any hot spots, blisters, or any foot issues wearing my Lola Gams! That exact sentiment is echoed by everyone I know who has worn them for GORUCK. Oh, and they’re MADE IN THE USA!

The Ever So Amazing Cadre

The Cadre are what really make the GORUCKS so special. Their knowledge, expertise, and experiences are nothing less than incredible. I’ve had the honor of being led by one that was a former Israeli Defense Force Special Forces Operator, one who was a Navy Seal, another who is a Green Beret Team Sergeant, just to mention a few. We are so blessed as Americans to have these talented individuals serve and protect our great country. They are not only extremely skilled and intelligent, but what shines through at these events is their own unique personality, sense of humor, and slightly sadistic side. (ie: the St. Augustine Tough where, thanks to Cadre Cody we did arm raises for days!) That goes hand in hand with the territory though. Their job is to push you beyond your limits, past what you think you can do. They have a keen sense to recognize those that are sandbagging and those that are truly giving it all that they physically have. They also seem to know when you’re mentally checking out and have the ability to snap you out of it! A lot of preparation goes into planning these events and it starts on the group Facebook page getting people scared, I mean prepared, for their upcoming event. Cadre Surfhog did an amazing job with the recent St. Augustine Tough. He gave us an idea of some things to expect and plan for, but also had some fun keeping us anxiously guessing what may be thrown our way! I wasn’t sure if I should be more worried about swimming in deep ocean water with sharks or the threat of an insane amount of flutter kicks. Turns out I survived both and escaped with only a minor flesh wound from a small Mako shark. Ha.

It’s NOT About You…

I saw this statement in the official GORUCK video before my first event, but didn’t really get it. I thought, of course it’s about me, it’s about me surviving! Lol! WRONG!!! It was around 5am during my Fort Myers Tough that I had that “Aha Moment”. I was tired, so cold, and Cadre Aaron (aka Mr. GQ) showed us this ginormous rock that we were now expected to figure out how to carry! What??!?!??! We already had so much additional weight and casualties we were carrying. How could he possibly expect us to carry a 400# rock too?!?! It was at that moment when I so badly wanted to quit that I realized it was about so much more than me. Everyone else was just as tired, hungry, frustrated, cold..if I quit they would still have all the weight, but one less person to help them. “It’s not about you!” GORUCK brings people from all walks of life, different professions, ages, genders, ethnic, racial, and socioeconomic backgrounds, breaks them down as individuals so that they can learn to work together as a team. This philosophy can carry through to everyday life. We can achieve anything if we work together rather than alone. Imagine if more people went out of their way to help those in need, held themselves accountable for their actions, worked their hardest at everything they did, tried to be more understanding and accepting of others, and embraced each others differences and opinions. It’s true what GORUCK states, that the Cadre are in fact building a bridge between the civilian and military worlds, and that they’re building better Americans in the process.

I always had respect and appreciation for those who served, currently serve, and those who paid the ultimate sacrifice for our freedoms, but GORUCK has given me an even deeper respect for these selfless individuals. The cadre for my first event required us to choose a fallen soldier to honor. We had to memorize and be able to recall their first and last name, city of origin, branch of service, and how they died. I didn’t know anyone personally who lost their life fighting for our country, but I have a good friend who served in Iraq during Operation Iraqi Freedom whose buddy was killed be an IED. He loved the idea that I wanted to honor his friend, Cpl. Steven A. Rintamaki for my event. Different times throughout the night when things got tough I thought about Steven and what he must have went through as a soldier, situations a million times worse than what I was experiencing. It wasn’t until the very end of our challenge, 15 hours later, that our Cadre had each of us individually stand next to him and the American flag and share the story of our fallen soldier with the group. It was one of the most emotional, unforgettable moments I’ve ever experienced. Because this left such an impression on me, I’ve chosen my own fallen soldier that I’ve recognized, thought about, and honored throughout my other events and I’ll continue to do so for future challenges. I am so grateful for my freedoms that I have thanks to these brave men and women. #LANDoftheFREEbecauseoftheBRAVE.

Get Comfortable with Uncomfortable

I am a firm believer in this motto. I feel it is absolutely necessary for any type of personal growth. My initial introduction to this was in CrossFit. You learn pretty quickly that the body is an incredible machine that will go on and on, however, we have to first convince our minds that it is possible. GORUCK is the perfect arena to test out this motto. From the moment you begin, you’re uncomfortable. Cadre Machine at my Key West Tough had us doing burpee tuck jumps the second we arrived until we all introduced ourselves, including his rather lengthy introduction! 🙂 (yeah, all in all 30 minutes or so) He then quickly had us testing our sit ups, push ups, and one mile run time followed by some endless bear crawls. So that sucked….AND we’ve completed the first hour of torture. How you choose to let your mind handle it sets the tone for the next several hours. It’s about holding that ruck overhead while in a squat for another twenty seconds when every muscle in your body is shaking, it’s about being exhausted but offering to carry someone else’s ruck because they’re struggling more than you, it’s about encouraging and sharing positivity with your teammates when you’d really like to request an uber and call it a night, It’s GORUCK and it’s about pushing yourself beyond your limits. This mental toughness that I’ve gained from CrossFit, Spartan Races, and GORUCK challenges is something that carries over in my everyday life. In a three year span I lost my mother, father, and a very dear friend. Without the balance of physical, mental, and spiritual strength I would be an absolute wreck. Moving forward and stepping out of your “box” can be scary, but if you don’t you’re trapped in mediocrity. Stepping out of our comfort zones, trying new things, setting goals all make us better humans. By helping yourself and finding happiness it automatically spills over…helping and bringing happiness to those around you in so many different ways. “If it doesn’t challenge you, it doesn’t change you.”

Do it for the patch

Of course it’s about the patch!!! My friend, who rocked her first event with me in St. Augustine, always told me to “do it for the shirt” when we would talk about doing a competition or a race. We’ll modify that thanks to GORUCK! It’s so much more than a patch though. It’s an incredible feeling of accomplishment knowing that you trained, prepared, followed through, and that you survived! In the process you met exceptional Cadre, worked with a group of strangers that became teammates and in some cases friends, burned an awful lot of calories, and undoubtably learned a thing or two about yourself. You are truly left feeling like you can accomplish anything if you try hard enough and hopefully have been inspired to inspire!!! I will leave you with a couple of sayings that helped me along the way. The first is “nothing lasts forever” and the other is “stay in the moment”. I think they both speak for themselves. #GORUCK #BUILDINGBETTERAMERICANS